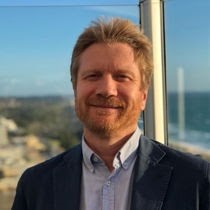 Ben Bowler is the Executive Director of UNITY EARTH, a global network building a worldwide movement for unity and peace. He is also the Co-Convener of World Unity Week: June 19th – 26th. A 8-day celebration of our global unity and will spotlight topics such as: collective climate action, partnerships for peace, global governance, interfaith harmony, sustainable and regenerative development, the role of business and economics, human rights, disarmament and other key elements of a new kind of future we are co-creating together.

Ben is a unity-activist and spiritual entrepreneur. In 2006 Ben and his wife Jildou moved from Australia to Thailand in response to an opportunity to volunteer along the Thai-Burma border. Together in 2008 they founded Blood Foundation, a micro NGO focusing on Burma issues, interfaith projects and education programs for migrant workers.

In 2009 he founded Monk for a Month, a cultural and spiritual immersion program in Thailand. This then grew into World Weavers, a social enterprise specializing in authentic spiritual adventures into some of the world’s great faith traditions, including in Tibetan India, Nepal, Cambodia and Ethiopia.

In 2010 Ben launched  Muslim for a Month  in Turkey, offering guests a first-hand experience of Turkish Islam and Sufism, under the spiritually inclusive banner of Mevlana Rumi. In 2012 Ben convened the first U DAY Festival in Chiang Mai, Thailand as part of the Birth 2012 global events. This event combined spiritual leaders from a variety of traditions with popular music artists. U DAY is scheduled for Ethiopia in 2018, India in 2019 and Jerusalem in 2020.

Dubbed  “The Faith Dealer”  by Readers Digest in 2013, Ben is a “Social Entrepreneur in Residence” at the prestigious INSEAD Business School and is a blogger for the  Huffington Post. Ben and his team launched 1GOD.com in October 2015 at the Parliament of the World’s Religions. The purpose and mission of this growing online platform is to “Unite the Tribes”: to cultivate  global spiritual unity  while maintaining and celebrating rich diversity.

Together with Dr. Kurt Johnson and Doug King, Ben founded The Convergence Radio Series on Voice America. The series features a host of Evolutionary Leaders and other prominent voices looking ahead to the many exciting developments on the Road to 2020. In 2016 Ben partnered with United Religions Initiative and Cultural Infusion to found Sacred Australia, a network committed to a deepening of the Australian spiritual identity and connected with the historic repatriation of Mungo Man.

We live in a cosmic moment which is utterly unique and which represents an opportunity for the greatest of adventures, beyond anyone’s wildest dreams.