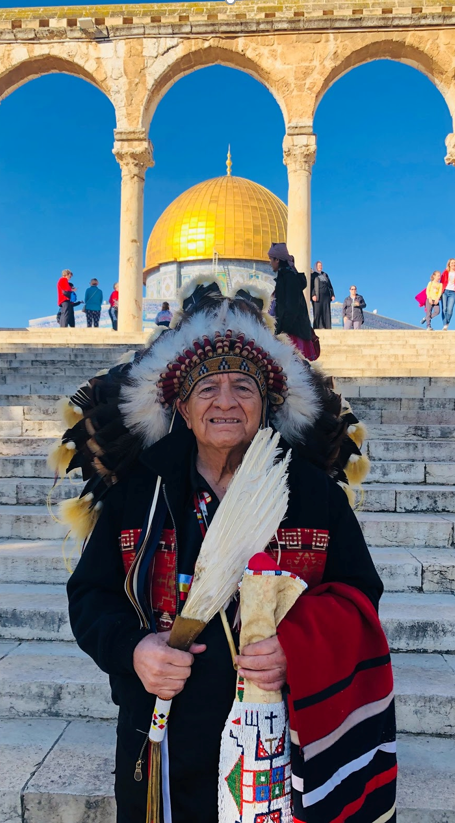 Hereditary Chief Phil Lane Jr. is an enrolled member of the Ihanktonwan Dakota and Chickasaw Nations and is an internationally recognized leader in human, community, and economic development. He was born at the Haskell Indian School in Lawrence, Kansas in 1944, where his mother and father met and attended school.

During the past 48 years, Chief Lane has worked with Indigenous Peoples from North, Central, and South America, Micronesia, South East Asia, India, Hawaii, and Africa. He served 16 years as an Associate Professor at the Faculty of Education at the University of Lethbridge, Alberta, Canada (1980-1996).

In 1982, with Indigenous elders and spiritual leaders from across North, America, Chief Lane founded the Four Worlds International Institute (FWII). FWII became an independent Institute in 1995. As well, Phil is Chairman of  Four Directions International,  First Nations Solar, Compassion Games International, and is a Global Trustee of the United Religions Initiative.

With Chief Lanes’ guidance and applied experience, FWII has become an internationally recognized leader in human, community, and economic development because of the Institute’s unique focus on the importance of culture and spirituality in all elements of development. Both Four Directions International and First Nations Solar serve FWII’s economic development arm. Both dedicated to the development of sustainable commercial enterprises that support holistic, political, social, cultural, environmental, and educational development.

In 1977, Chief Lane was named a Modern Indian Sports Great by the National Indian Magazine, Wassaja, for his record-breaking accomplishments in Track and Wrestling. He has extensive experience in his cultural traditions, is an award-winning author and film producer and holds Master’s Degrees in Education from National University, Public Administration from the University of Washington and was awarded a global fellowship to attend the Institute of Arts Administration Summer Intensive, Harvard School of Business, Harvard University.

Chief Lane’s film credits include the award-winning films, “Images of Indians”, “Walking With Grandfather”, “The Honor of All: The Story of Alkali Lake”, “Healing the Hurts” and “Shift of the Ages ” and “Us and Them.” A biographical story of Chief Lane’s life is currently in development.

In August 1992, Chief Lane was the first Indigenous person to win the prestigious Windstar Award, presented annually by the late John Denver and the Windstar Foundation.  The Windstar Award recognizes a global citizen whose personal and professional life exemplifies a commitment to a global perspective, operates with awareness of the spiritual dimension of human existence, and demonstrates concrete actions that benefit humankind and all living systems of the Earth.

In November 2000, Chief Lane received the Year 2000 Award for Freedom and Human Rights in Berne, Switzerland. Chief Lane was the first North or South American person to win this award. The Swiss Foundation gave this Award for Freedom and Human Rights in recognition of Chief Lane’s, “Unique contributions to improving the lives and future hopes of Indigenous populations. In particular, his merits of promoting freedom and justice for Indigenous Peoples by building human and spiritual capacity, rather than opposing oppression directly and his international visionary initiatives with Indigenous populations by healing the root causes of hopelessness and despair.”

This Healing and Reconciliation process resulted in a $3.5 Billion settlement for Residential School survivors, a full public apology by the Prime Minister of Canada and Leaders of all Political Parties on the floor of the Canadian Parliament, and the establishment of a $500 million Aboriginal Healing Foundation.  As well, a formal, five-year, Truth and Reconciliation Commission was mandated. The Commission held public hearings across Canada on the impact of the Residential Schools on the Aboriginal Peoples of Canada. The Final Report of the Commission was publicly tabled across Canada in December 2015.

In 2008, Chief Lane completed a three-year tenure as CEO of the United Indians of All Tribes Foundation (UIATF) in Seattle, Washington in 2008. He served as Director of Planning and Education and Assistant Executive Director of UIATF from 1973-1980.  The Foundation’s achievements during his tenures include the launching of the First Native American Film Festival and the development of a host of innovative education programs.  These innovative programs ranged from elementary and high school curriculum design and development, adult education, early childhood education, and the launching of a $3.5 million holistic poverty-alleviation program model for urban Indigenous Peoples.

Since 2008, Chief Lane has stepped into global leadership.  He is Chairman of the Four Worlds International Institute (FWII), Four Directions International, First Nations Solar, the International Compassion Games, a Global Trustee of the United Religions Initiative (URI), a member of the American Indian Science and Engineering Society, (AISES), Council of Elders. He also serves as Faculty Member of the Shift Network and Host of Shift’s Global Indigenous Wisdom Summits, and Honorary Advisor to the Help Foundation of the Beijing Women’s and Children’s Development Foundation.

The FWII’s central initiatives include the promotion of Deep Social Networks and The Digital Fourth Way, Environmental Protection and Restoration, the Compassion Games International and Reuniting the Condor, Quetzal, and Eagle via the Fourth Way. The focus of the Fourth Way is co-creating community-based, culturally respectful, principle-centered strategies and programming for human, community, and economic development that transcend assimilation, resignation, and conflict.

Deep Social Networks (DSN) are principle-centered, collaboratively created, and community-based digital networks for uplifting education, sustainable and harmonious development, child protection, social development, and actualizing environmental justice.  Chief Lane’s work in manifesting the Reunion of the Condor, Quetzal, and Eagle via the Fourth Way, with the Indigenous Peoples of the Americas, began in Bolivia in 1970-1972 and continued nonstop until today.

In June 2013, the Four Worlds Foundation officially opened at the City of Knowledge in Panama City, Panama.  It is the only Indigenous NGO, of the 250 NGOS, United Nations Agencies, Educational Institutions, and Businesses centered at the City of Knowledge. The Four World Foundation is the International Hub for actualizing the Reunion of the Condor, Quetzal, and Eagle across the Americas and beyond via the Fourth Way.