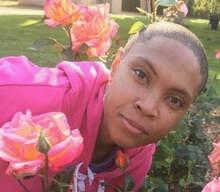 Felecia “Fe Love” Lenee is a Co-Producer for 2nd Sundays of One Global Family’s Call To Action Broadcasts ~ “SACRED ACTIVISM: Peace Sundays RevoLution”, she’s also an Advisory Board Member for One Global Family Foundation & Alliances. Felecia “Fe Love” Lenee, Co-founder of Compassionate ARTS in Action and our BLM mural project manager is better known as Fe Love to her fans.  Fe Love is a huge advocate for social and environmental justice, especially as it relates to BIPOC.  #WhenBlackandBrownGoGreen is a campaign project to encourage more BIPOC to become leaders in the climate and environmental justice movement. She is the host and creator of the Artist Eclectic pLAygROUND, a “pop-up” event space that supports new as well as established artists and innovative entrepreneurs primarily in the Pasadena and Greater Los Angeles area. Fe Love is on the Leadership Team for CompassionateCalifornia.org and co-founder of the Compassionate ARTS IN ACTION. She works as the Youth Program Director and Creative Strategist for the national project, Posts for Peace and Justice.    Felecia has a B.F.A. from CALARTS where she trained as an actress. Her goals are to support youth, with a focus on health, public safety, and social justice. Felecia’s recent public appearances highlighting youth include: March for Our Lives, Los Angeles, CA; Youth Action Summit, Memphis, TN, the U.S. Human Rights Network National Conference, Atlanta, GA., and the 26th Anniversary of the American Disabilities Act, at the White House.  Felecia Lenee is a healer an 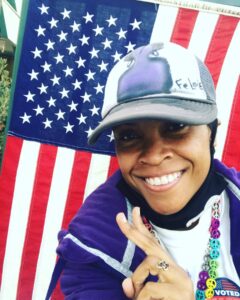 d a certified massage therapist with a concentration on energy balancing.  Fe Love  has  been facilitating “Compassionate Conversations” in the community with law enforcement (Compassionate Cops) in support of Black Lives throughout Pasadena, on national platforms and even internationally, such examples include the World Summit on Countering Violence and Extremism  in India and at the Parliament of the World’s Religions   in Toronto, Canada.” Currently, Fe Love has been leading a series of mural projects with local Compassionate Artists, called “Paint Dena Peaceful” which started this summer in support of Black Lives Matter. She has also been in 16 films, has over 25 years of performing live on stage as a host and entertainer, and in several podcasts promoting racial, gender equality, and justice. 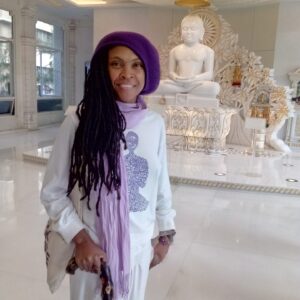