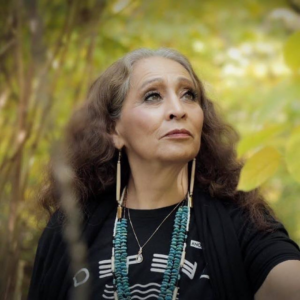 LaDonna Tamakawastewin (Good Earth Woman) Brave Bull Allard (June 8, 1956 – April 10, 2021) a Native American Dakota and Lakota historian, genealogist, and matriarch of the water protector movement at Standing Rock. In April 2016, she was one of the founders of the resistance camps of the Dakota Access Pipeline protests, aimed at halting the Dakota Access Pipeline near the Standing Rock Indian Reservation in North Dakota.

LaDonna Brave Bull Allard was born on June 8, 1956, to Valerie Lovejoy and Frank Brave Bull. Her people are Iháŋkthuŋwaŋ, Pabaska (Cuthead), and Sisseton Dakota on her father’s side and Hunkpapa, Lakota Blackfoot, and Oglala Lakota on her mother’s side. She is a descendent of Chief Rain-in-the-face who fought Custer at the Battle of Greasy Grass. She is also the great-great-granddaughter of Nape Hote Win (Mary Big Moccasin), a survivor of the Whitestone Massacre. She is an enrolled member and former Tribal Historic Preservation Officer of the Standing Rock Sioux Tribe.

LaDonna Brave Bull Allard graduated from the University of North Dakota with a degree in History. She later became the Standing Rock Tourism Coordinator where she was instrumental in establishing the Standing Rock Scenic Byway which passes many historic sites including the place where Sitting Bull was killed. Some of her extensive tribal genealogy work can be seen on a history website called American Tribes.

The first resistance camp of the Dakota Access Pipeline protests was the Sacred Stone Camp, established on her family’s land at the confluence of the Cannon Ball River and the Missouri River. The resistance camps were initially quite small but grew exponentially in size after Brave Bull Allard posted an emotional plea for help on social media.

These protests sought to halt the construction of the Dakota Access Pipeline because it crossed lands protected by the Treaty of Fort Laramie (1851) and ran beneath the Lake Oahe reservoir, the drinking water source for the Standing Rock Sioux Tribe. During the construction of the pipeline, workers bulldozed burial grounds and other archeological sites identified by Brave Bull Allard and the Standing Rock Tribal Historic Preservation Office. The movement at Standing Rock brought thousands of people together to form the largest intertribal alliance on the American continent in centuries, with more than 200 tribal nations represented.

After years of resistance and protest, the Standing Rock Sioux Tribe and Indigenous organizers scored a legal victory on June 6, 2020, when a federal judge ordered pipeline owner consortium Dakota Access LLC, controlled by Energy Transfer Partners (founder and CEO Kelcy Warren), to stop operations and empty its pipelines of all oil pending an environmental review that could take a year. The court said the U.S. Army Corps of Engineers violated national environmental law when it granted an easement to Energy Transfer to build and operate beneath Lake Oahe because it failed to produce an adequate Environmental Impact Statement.

LaDonna Brave Bull Allard had been diagnosed with brain cancer and underwent brain surgery in 2020. On April 10, 2021, her family announced her death. She was preceded in death by her son Philip Levon Hurkes in 2009, and her husband, Miles Dennis Allard, in 2018.

Upon her death, North Dakota State Representative Ruth Buffalo said, “Her courage was contagious and inspiring. She was very knowledgeable of the extensive history of the land and worked to preserve our history and sacred sites.”  South Dakota State Senator Red Dawn Foster said, “She inspired the world with her love for the water, the land, the people, and the love she shared with her husband Miles.