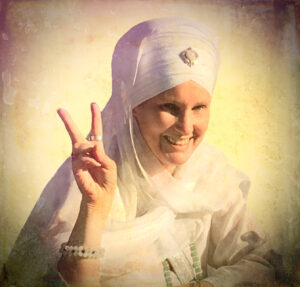 Simran Kaur serves as our graphic artist to support the Website, Social Media & Marketing teams for Peace Sundays. Simran is an Advisory Board member for Unity and Diversity World Council (UDWC 2.0), and also as such for two of its Affiliate DBA’s known as One Global Family Foundation & Alliances (OGFF&A), and the global Councils of Interfaith & Indigenous Women-Youth (CIIWY).

Born in Los Angeles, Simran Kaur spent her formative years in France, returning to the United States at age 21. In addition to English, Simran Kaur speaks French and German.

She is a Sikh Dharma Minister, a spiritual counselor, an energy healer, and a Kundalini Yoga teacher.

Simran Kaur feels that it is a privilege and a blessing to be able to interact and dialogue with religious representatives and leaders of other faiths, creating bridges of understanding and awareness that bring all hearts together.

Back to Contacts Page