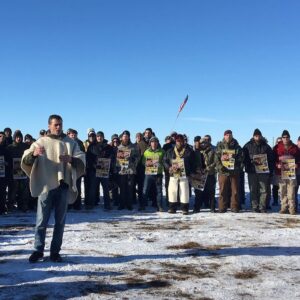 Former Army Lt. Wesley Clark Jr. is the son of Gen. Wesley Clark, former Supreme Allied Commander of NATO. Clark, along with Michael A. Wood Jr., a former Baltimore police officer and Marine Corps veteran, organized the deployment that formed Veterans Stand for Standing Rock. Clark reached out to lawyers, to politicians, to members of the press, and even got the Young Turks to send Jordan [Chariton] out to Standing Rock in October. He did everything he could to try to help the tribe, however, nothing was happening. The Army Corps of Engineers had recently ordered the eviction of Oceti Sakowin, the largest of the water protectors’ camps, saying the thousands camped there would have to vacate by Dec. 5. The governor ordered an emergency evacuation, and the county sheriff threatened to issue $1,000 fines to anyone caught delivering food, firewood and other support needed to keep the camp alive. Clark and Woods put out an operations order, a call to veterans on both Twitter and Facebook, to join them there December 5th.

On December 4th, the word arrived that the Obama administration refused the final permit for the Dakota Access Pipeline. The Army Corps of Engineers said it would first consider other routes, require an environmental impact statement and consult with the Sioux tribes. Approximately 4,000 veterans heeded the call to join thousands of Native water protectors and their allies, and the next day, some veterans participated in a formal “forgiveness ceremony,” which began with an emotional plea to the tribe for forgiveness. Clark says, “If you want to effect change in the world, it has to come through nonviolence and forgiveness.